It’s a well-known and highly talked about reality that most companies are led by men. Even when women make up the majority of the workforce, they still comprise less of the leadership. Our own data further establishes that oft-cited fact—we analyzed over 3,700 most rated US companies on Owler and found that women account for only 5.6 percent of CEOs.

Yet, while we’ve all heard about the discrepancies in the quantity of female leadership, the quality is harder to discern. With over a quarter million CEO ratings from the Owler Community in 2017 thus far, we found ourselves in the perfect position to find out.

Generally speaking, women in professional power positions face a deluge of destructive stereotypes. A quick Google search of ‘female leader stereotypes’ turns up hundreds of thousands of web pages filled with articles and research examining, explaining, and critiquing negative stereotypes attached to women in power. And while certainly not all female CEOs are disliked, there seem to be some potent preconceptions about the women leading the workforce.

Our new Owler CEO Likeability Study evaluates both individual and average approval ratings for CEOs across cities and industries, as well as at private vs. public companies. Here, to understand how actual women in the workplace are perceived by the public, we’ve compared ratings of female CEOs to those of their male peers and segmented our data according to public exposure. To nobody’s surprise, our findings indicate that women in power have a tougher time keeping a positive perception when it comes to leading in the limelight. It seems that women in public companies face sharper judgement by coworkers, competitors, and others; while female CEOs of private companies receive approval ratings equal to those of their male peers.

Everyone Has An Opinion About the Ladies Who Lead Public Companies

While female leaders may be rare, opinions about them certainly aren’t. Out of the 1,014 public company CEOs we analyzed, 961 are led by men and 53—or 5 percent—are led by women. Despite the scarcity of women in power positions at those public companies, they receive an average of 58 percent more ratings than the male CEOs (128 ratings vs. 81).

But more votes isn’t necessarily advantageous for these ladies who lead. In fact, it seems as if the spotlight hurts their perceived credibility to some extent. When it comes to public companies, female CEOs receive more attention and harsher ratings than those of their male counterparts. These 53 women at the wheel in public companies average a CEO rating of 62.5, while the 961 men score 67.1—yielding a slight 7.4 percent disadvantage for women.

Additionally, a quarter of women heading public companies receive approval ratings lower than 50, while only 16 percent of men in the same position score lower than 50. When we turned our attention to the top rated CEOs, only 17 percent of the 53 women have approval ratings higher than 80 points, compared to 26 percent of men. So while women in the workforce have certainly etched some sizable cracks in the thick glass ceiling, our data illustrates that it’s harder to break through while in the public eye.

The scant representation of women CEOs across public and private company CEOs is perhaps the only commonality we found between these two categories. Lucky for the women leading private companies, CEOs of both sexes are perceived on par. Of the 2,641 most rated US-based private companies CEOs on Owler, a mere 6 percent—or 155 companies—have a lady at the helm. Female CEOs score an average of 69.1, only one point shy of their male counterparts’ mean score of 70.1.

When we analyzed the top rated male and female CEOs of private companies, we found that men and women score higher than 80 at almost equal frequency: 34 percent for the men, and 32 for the women. In terms of contribution volume, male and female bosses receive a similar number of ratings on average (27 for male vs. 22 for female).

Women Who Lead Private Companies With Ratings Over 80.0 Points:

Not All Industries Favor Equally

Overall, female CEOs are perceived more favorably in some industries than in others, regardless of whether those companies are public or private. Unexpectedly, in Finance females outperform their male colleagues by an average of 6.7 points, earning 78.1 points to the men’s 71.6. In Consulting & Business Services, women who lead just barely squeeze past the men in charge, beating them out by razor-thin margin of 0.7 points (70.2 points vs. 69.7).

It’s also worth noting the percentage of female-led companies in each industry. Of the 25 industries in our study, the percentages varies between a high of 14 (in Marketing & Creative Agencies) and a low of zero (in Airlines). Effectively, that also means that within several industries, only one or two women carry the average for the entire female sex on their shoulders.

When female representation among CEOs is so incredibly low, it means that each and every woman impacts the perception of female leadership. While low ratings for a man who runs his company into the ground get lost among thousands of ratings, a woman’s mishap leaves a noticeable stain on the female average rating.

For instance, Heather Bresch, CEO of the pharmaceutical company Mylan, hiked the price of the EpiPen by 400 percent last August, a PR disaster that has dragged her approval rating down to an abysmal 28.5 points. As one of only 53 female CEOs in the public sector, and only seven in the Pharma & Biotech category, her poor choices drag the overall public perception of women in power down with her. While it may not have been what they signed up for, these women represent their entire sex.

Then there’s Yahoo! CEO Marissa Mayer. She oversaw the tech relic during the recent, disastrous security breach and helped sell what’s left of the company to Verizon for $4.48 billion—one-tenth of what Microsoft offered in 2008. Now she’s reaching her final stretch at the overripe organization: she’ll be relieved of her position as CEO when the Yahoo!/Verizon deal closes. Her string of bad business decisions sunk her score to 32.8, single-handedly lowering the average rating for female CEOs of public companies by 0.6 points.

But of course, this responsibility comes with its benefits as well. It gives the women at the top, CEOs or otherwise, a unique and powerful voice. When they speak out, the business world listens.

Take Facebook COO Sheryl Sandberg: she authored of Lean In, which has become global movement, inspiring a nonprofit of the same name. Lean In provides resources to help women support one another, connects working women, and partners with over 900 companies (including Salesforce, Airbnb, and Amazon) to support gender equality in the workforce. Sandberg’s outspoken insights have also sparked a national conversation about the adjectives we use to describe girls and women and led to a campaign to replace the word “bossy” with “leadership potential.”

The Glass Ceiling is Cracked

Despite the fact that in 2017, male CEOs still drastically outnumber female CEOs at the largest companies, women are gaining momentum in traditionally male-dominated fields. Additionally, though correlation does not equal causation, the Owler Community’s considerable contributions for female leaders may indicate a spiking interest in either companies led by women or in the performance of female CEOs themselves. This might be good news for female leaders out there—though there’s still a long way to go, there are some definite cracks in the glass ceiling. 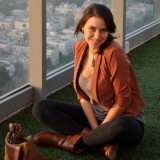