#1: To get rid of that guilty feeling

CEOs are busy people. Every day they go home feeling like there were fifty things they should have done that day. Scouring news outlets for competitor news is usually one of them. Owler’s daily news Snapshot monitors over 3,500 global business news feeds looking for articles on a company’s competitors. For CEOs, Owler both informs and rids of guilt.

#2: Keeping the board off their asses

If you’ve never attended a board meeting, you’re lucky. Many CEOs first action after a board meeting is to crawl under their desk and curl into a fetal position. A common lambast by a board member in a board meeting is: “We’re not paying close enough attention to our competitors!” With Owler’s weekly Competitive Intelligence Reports this problem is solved.

#3: Keeping the product and marketing teams on their toes

From a competitor perspective Owler takes a CEO off defense (with the board) and puts her on offense (with her product and marketing teams). CEOs forward Owler daily Snapshots and weekly Competitive Intelligence Reports to their teams, usually with one of these two subject lines:  a) “Great job kicking their butts on this!” or b) “How the heck did they kick our butts on this?!”

When things are going badly a CEO must focus on the immediate. When things are going well a CEO has the luxury of focusing on the future. When a CEO peers into her crystal ball and plans for the future she is usually combining data from many sources with a lot of gut instinct. Owler is a key data input for many CEOs. Understanding one’s competitive landscape is a critical component to any go-forward strategy.

For CEOs it all boils down to one thing: sales. If a company doesn’t make enough sales it will eventually die, usually after firing the CEO. Many companies have a tradition of a deal bell. They hang a brass bell in the office and every time a sale is made the salesperson who closed it joyously rings the bell. All employees love to hear this sound. Obviously, salespeople who are well informed about their competitors make more sales. Therefore, many CEOs require their entire sales team to use Owler because they love the sound of a loud ding from a brass bell. 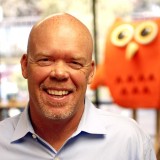